Exposure to highly toxic chemicals can result in severe health effects or even death. In the past, the cellular processes leading to damage on the cellular level have been regarded as unspecific. However, it is now well accepted that highly reactive chemicals address defined cellular targets and thereby causing cell stress and dysfunction.
The Gudermann/Steinritz lab is interested in the molecular toxicology of alkylating compounds. Alkylating substances (e.g. chlorambucil, melphalan) are frequently used as anti-tumor therapies but can they can also be mis-used as chemical warfare agents (e.g. sulfur mustard or CEES, a monofunctional SM analog) as it repeatedly happened in the current Syria crisis. We have been able to demonstrate that sulfur mustard (SM) is indeed able to activate the Transient Receptor Potential A1 channels (TRPA1). Activation of TRPA1 by SM results in elevation of intracellular calcium levels ([Ca2+]i) which can be effectively prevented using specific TRPA1 blockers (Fig. 1).

Fig. 1: (A) Activation of TRPA1 channels by the mono-functional alkylating compound CEES and subsequent elevation of [Ca2+]i. (B) The specific TRPA1 inhibitor AP18 prevents channels activation and CEES-induced increase of [Ca2+]i.

1. What are the cellular consequences of the SM-induced and TRPA1-mediated increase of intracellular calcium levels?

Initial experiments revealed that activation of MAP kinases after exposure to alkylating compounds is TRPA1 dependent (Fig. 2A). Moreover, TRPA1 overexpression results in increased toxicity of alkylating compounds that can be counteracted to some extend by pretreatment with specific TRPA1 inhibitors (Fig. 2B).

Fig. 2: (A) Cell signaling after SM exposure as shown by ERK-phosphorylation is dependent in TRPA1 channels. (B) Overexpression of TRPA1 enhances cytotoxicity of alkylating compounds that can be partially counteracted by pretreatment with the TRPA1 specific inhibitor AP18.

2. What is the exact activation mechanism TRPA1 channels by alkylating compounds?

Previous studies have shown free of doubt that alkylating compounds are able to activate TRPA1 channels. The exact chemical mechanism has not been elucidated so far. A direct covalent modification of intracellular cysteine residues in the ankyrin repeat sequence, SM-induced changes of the pH as well as interactions with other until now not-defined binding sites are discussed. Fig. 3 outlines the current knowledge. 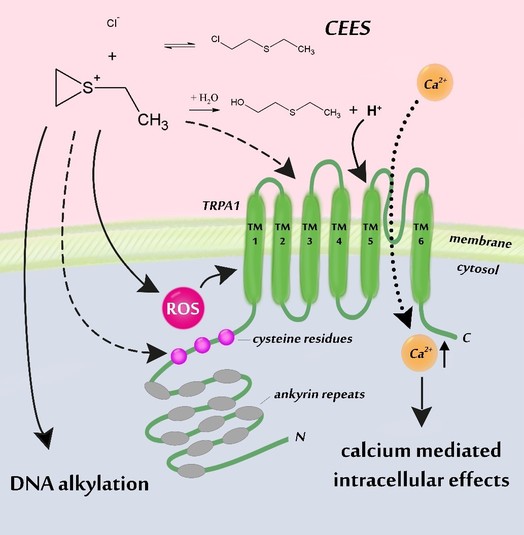 Fig. 3: Potential mechanisms of CEES-induced and TRPA1- mediated calcium influx. Intracellular cysteine residues have been discussed as targets for covalent modifications, including alkylation, resulting in TRPA1 activation. Alkylating properties of CEES with regard to DNA and proteins are well known. Thus, alkylation of nucleophilic amino acid residues, including intracellular cysteine residues of TRPA1, is likely to occur. Proton-induced activation of TRPA1, associated with the transmembrane domains 5 and 6, has also been discussed. Thus, proton release during CEES hydrolysis may contribute to a direct TRPA1-mediated calcium influx. However, the calcium influx induced by CEES is more intense and sustained than the HCl induced increase in [Ca2+]i. Thus, our experiments revealed a distinct TRPA1 activation that can be attributed solely to CEES.