Platelet receptor-induced phospholipase C activation and consequent hydrolysis of PIP2 to IP3 and DAG is a central event to modulate Ca2+ responses during platelet activation. Elevation of the cytoplasmic Ca2+ concentration occurs through Ca2+ release from the IP3 sensitive intracellular Ca2+ stores located in the dense tubular system (DTS). Calcium-store depletion and increase of DAG production induce Ca2+ entry mechanisms through store-operated Ca2+ channels (SOC) and DAG sensitive receptor-operated Ca2+ channels (ROC), respectively. During the last decade, our research group is strongly focused to understand the molecular mechanism of SOCE and ROCE using platelets isolated from genetically modified mice. We identified the physiological role of the Ca2+ sensor stromal interaction molecule 1 (STIM1) and Ca2+ channel ORAI1 as the principal mediators of SOCE in platelets. Our findings also revealed that TRPC6 is the major DAG-sensitive ROC channel in platelets. Under pathophysiological conditions, we could identify STIM1 and ORAI1 isoforms as an important player in arterial thrombus formation and contributes to stroke development in vivo. Interestingly, STIM2 and ORAI2 functions were found to be redundant in platelets, but importantly, regulates neuronal SOCE in the mouse brain. Using knockout mouse models of different channelopathies, we further study Ca2+ entry mechanisms and their signaling pathways in different pathophysiological conditions in vivo.

Although it has been known for more than 50 years that reduced Mg2+ uptake frequently induces imbalanced Ca2+ responses in mammalian cells, the molecular players behind this process have not been identified. Impaired Mg2+ homeostasis is described in many cardiovascular diseases, especially in patients with coronary heart disease, arrhythmia, acute myocardial infarction, hypertension and stroke. We could identify TRPM7 channel as a key regulator of Mg2+ homeostasis in mouse megakaryocytes. Impaired channel activity of TRPM7 resulted in macrothrombocytopenia in mice and human patients, associated with abnormal myosin IIa function and platelet production. On the other hand, we found that the kinase domain of TRPM7 modulates Ca2+ store depletion and activates SOCE during platelet activation, suggesting that TRPM7, depending on the physiological status of the cell, can regulate both Mg2+ and Ca2+ homeostasis in these cells. 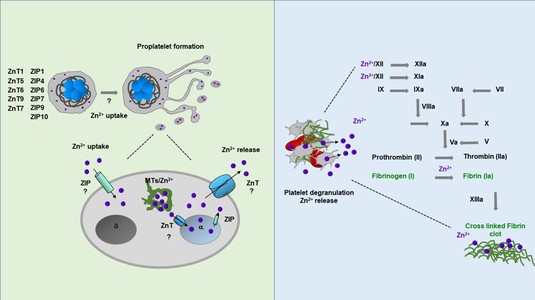 Other important nutrition, zinc (Zn2+) also circulates in the blood plasma, but only small amounts are present as a free metabolic form, which can be taken up by platelets and other blood cells. Reduced Zn2+ uptake in the body results in altered platelet aggregation responses and impaired hemostasis, while intracellular chelation of Zn2+ in platelets inhibits tyrosine phosphorylation cascades, platelet reactivity and aggregation responses. Earlier findings showed that incubation platelets with Zn2+ supplement increases intracellular Zn2+ level and also in the granules, pointing to the existence of Zn2+ uptake and storage mechanisms, although the molecular mechanism of Zn2+ transport and storage are still unknown in megakaryocytes and platelets. Furthermore, the Zn2+ concentration in blood serum was found to be higher than in plasma, suggesting that activated platelets can release a significant amount of stored Zn2+ during blood clotting. To study these processes, we isolated platelets from mouse models of storage pool disorders (SPD) and found abnormal storage and release of Zn2+ and these abnormalities were confirmed in human SPD patients as well. Impaired Zn2+ release could negatively influence fibrin formation, therefore we concluded that secretory granule resident of Zn2+ contributes to blood clotting. We identified several Zn2+ transporters in megakaryocyte and platelet which may be involved in diverse signaling functions of these cell types. Using megakaryocyte and platelet specific knockouts of Zn2+ transporter ZIP an ZnT, we currently study Zn2+ dependent processes in normal and disease conditions in vivo.